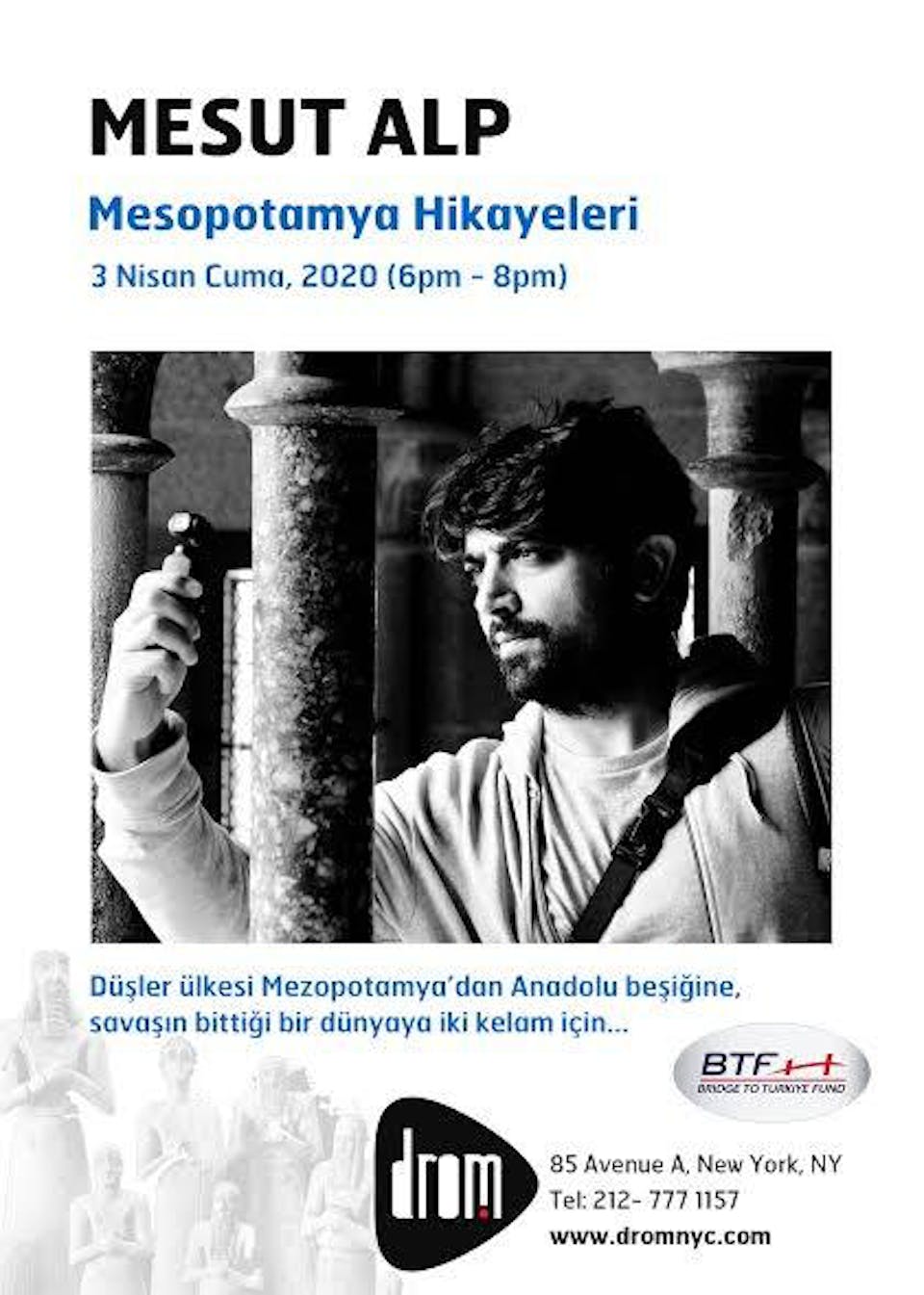 The event is to unite the regional cultures under the stories where we have been told for centuries from the ancient times in Ancient Mesopotamia, evolved to the contemporary form that we can tell our next generations. We need to know them to embrace our roots to create a strong foundation for forward. We need good storytellers with the depth of knowledge and the creative of aesthetics. Archaeologist Mesut Alp is one of them. He participated in numerous national and international archaeological digs across Anatolia and Northern Mesopotamia. Between, 2006-2014, he worked at the Mardin Museum. During this period, he served as a lecturer at the Mardin Artuklu University; held training workshops at local high schools on cultural heritage and its management; and delivered lectures on Mardin and the archaeology of Northern Mesopotamia on various platforms. After those years, he created an extreme unique style of lecturing that he could immerse his knowledge into the legendary historical events. This gives an opportunity to generations to learn the history in a very artistic way. Ancient Mesopotamia refers to the place where humans first formed civilizations. It was here that people first gathered in large cities, learned to write, and created governments. For this reason Mesopotamia is often called the "Cradle of Civilization". The word Mesopotamia means "the land between rivers". When people say Mesopotamia they are referring to a section of land in the Middle East between and around the Tigris and Euphrates Rivers. Today this land is located mostly in the country of Iraq. There are also portions in southwestern Iran, southeastern Turkey, and northeastern Syria. The heart of Mesopotamia lies between the two rivers in southern Iraq. We need to create a bridge on the land above the rivers for sustainable peace with heart- touching stories. We can discover many unknown to lighten the path to the peace that we need at most at this time of the century. This prevents many catastrophic and inhumane and very tragic events that we have been witnessing over years in the region.

Mesut has something to say about them.

The event is facilitated by one of NGO organizations, Bridge to Türkiye Fund (BTF), established in 2003 by Turkish American volunteers driven to make a difference, to improve life and to cultivate social change for the common good. BTF’s commitment to these ideals stems from our basic desire to give back to our native land for the many opportunities we have gained from her. BTF’s capacity building programs provide opportunities for Turkish-Americans to reconnect with their roots, while encouraging civic responsibility. BTF’s circles are dedicated to regions. NYC/NY circles established in 2014 and generated many organizations in NYC /NJ. This part of the BFT is facilitated the event for the fundraising as called MARDIN BTF. The donations for the event are directed by BTF/NYC to under BTF organization.

All the profit from this event will be directed to support children’s education in rural Turkiye through Bridge to Türkiye Fund (BTF).

BTF is a US based, UN accredited NGO, established in 2003 by Turkish American volunteers driven to make a difference, to improve life and to cultivate social change for the common good.BTF has supported hundreds of projects in Turkey via donations totaling over $4.5M all benefiting underserved children in Turkey. During the 2019-2020 academic year, BTF provided 1,062 students, totaling the impact to 4,600 students supported in over a decade with $2.1M in the form of educational scholarships.

Archaeologist Mesut Alp is a graduate of Ege University’s Department of Near Eastern Archaeology. He participated in numerous national and international archaeological digs across Anatolia and Northern Mesopotamia. Between 2006-2014, he worked at the Mardin Museum. During this period, he served as a lecturer at the Mardin Artuklu University; held training workshops at local high schools on cultural heritage and its management; and delivered lectures on Mardin and the archaeology of Northern Mesopotamia on various platforms. Alp was the recipient of several scholarships and awards, including those by U.S. Department of State’s International Visitor Leadership Program (IVLP) and the British Council’s Cultural Leadership International (CLI) program. He is the author of the book From Tales to Legends Mardin, written as part of the Mardin Sustainable Tourism Project. In addition, Alp is also the author of a book titled Qoser on Mardin’s Kiziltepe district. He is the director and scriptwriter of two short films, and served as the scriptwriter of two documentaries on Mardin’s Midyat district. He was one of the founders of the Mardin Education and Culture Association, and is the founding president of Nahrin pour Égalité Association. He also regularly contributes to Dilop, a bimonthly and bilingual literary magazine. Paris-based Alp is a professional photographer and shares a selection of his work on his personal Instagram page. He produces bilingual (Kurdish and Turkish) content on the history, archaeology, geography and the belief systems of Anatolia and Northern Mesopotamia on his Youtube channel.

For the lecturer, Mesut Alp info:

For Detailed Info for BTF -Bridge to Turkiye Fund 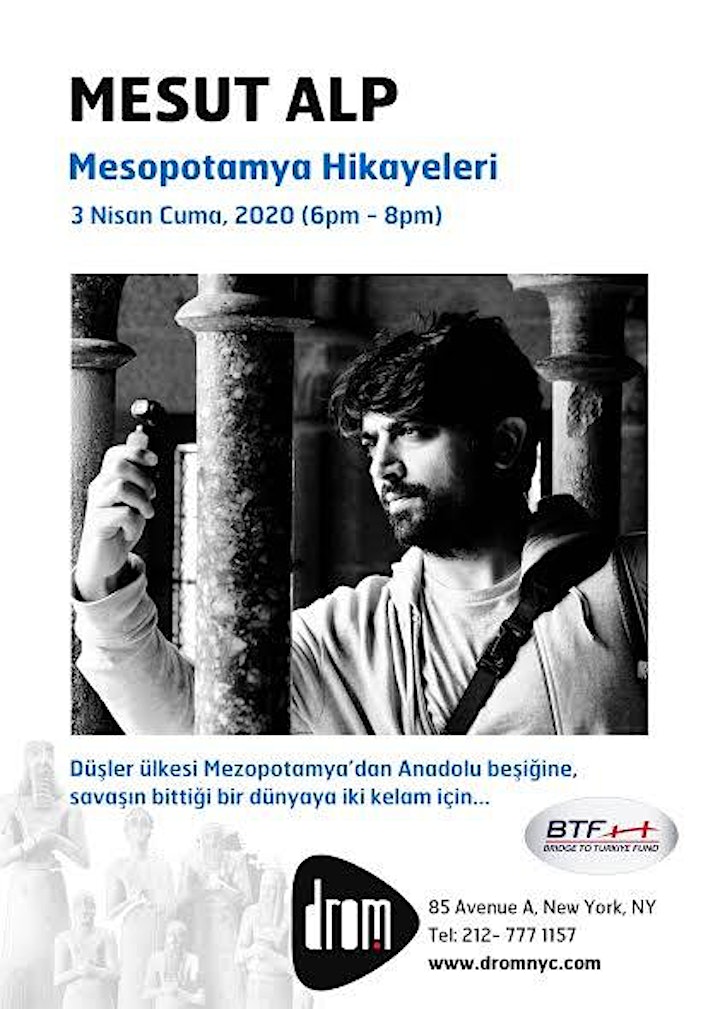